This month has been a little busy so I unfortunately dropped the ball with my blog posts. I didn’t get a chance to write 2 book intros, so I am going to combine the intros and put my reviews below them. We are going to start with this book…yeah I had so much hope for this one. 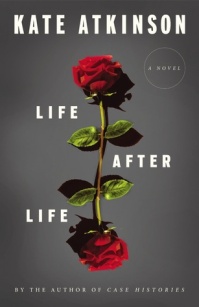 Goodreads synopsis: What if you could live again and again, until you got it right? On a cold and snowy night in 1910, Ursula Todd is born to an English banker and his wife. She dies before she can draw her first breath. On that same cold and snowy night, Ursula Todd is born, lets out a lusty wail, and embarks upon a life that will be, to say the least, unusual. For as she grows, she also dies, repeatedly, in a variety of ways, while the young century marches on towards its second cataclysmic world war.

Does Ursula’s apparently infinite number of lives give her the power to save the world from its inevitable destiny?

I selected this one after reading the Beast Within because I wanted something less dark. This book starts off with Ursula sitting across from a man (who we find out is Hitler) and shooting him, and then herself being killed and being reborn. So this book seemed promising! Every time that Ursula dies the book rewinds back to either her birth or a different part of her life where she gets a new chance to do something different. At first when she is a little girl she obviously doesn’t know why she gets weird feelings when certain things happen, but eventually she does learn that sometimes she has to do certain things in order to stop people from dying or getting hurt.

In general it would seem like the book would be interesting, and it really was in the beginning, but after several hundreds of pages and several resets it gets boring. I mean how many times can you read the same parts of her life over and over with them only having subtle changes. There were parts that were devastatingly sad like her rape at 16, her pregnancy because she didn’t understand she was raped, her marriage to an abusive man who kills her, etc but they didn’t lead to anything. They were all just a portion of her life that was erased at the reset. Yes, it was great that something changed in the life that made those events not happen which is supposed to make you appreciate how small changes can change someone’s life. This was interesting in the beginning but after hundreds of pages it got really old. Oh and the whole Hitler thing?! Well, it really is such a minor story line and apparently her ultimately killing him is not at all the main focal point of this story. I was really hoping that this books main plot would be to ultimately create a time line where Hitler died but nope. Total bait and switch.

I was really disappointed with this book. The story seemed to drag on without any real plot. I found myself putting the book down several times out of boredom. I went into this book knowing that there would be resets of her life, but I did not expect how many times this would happen. Seriously, it got really boring. I know this book won some awards, but it was just not enjoyable for me. I really don’t think I would read another one of this authors books.

One thought on “Book 12: Life After Life Review”