After the last book I read I figured I needed something totally different. Recently I have read about warriors, thieves, immortals, and I figure it is time to read about ghosts. I found this gem at my local library. Seriously, if you don’t check out your library you are doing this whole reading thing wrong LOL I would be broke without my library. Anyway, I found this lovely book about ghost hunters and thought it would be a fun read. So let’s get into the review! 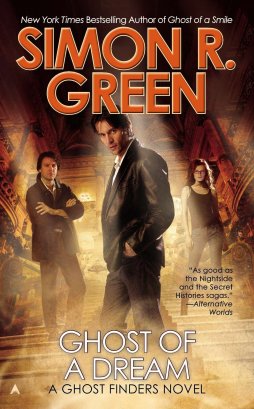 In this book you have Melody the science/tech genius, J.C their team leader (whose girlfriend is a ghost), and Happy their telepath.  Their mission is twofold in this book. Their first mission is to investigate a missing Victorian Steam train and then later on to  solve the haunting in a theater.

What I really enjoyed besides the witty banter was the fact that the ghosts in this book could in fact hurt the living and that it was their job to stop them. These weren’t you garden variety haunts, these were a train trying to come back to our dimension with its dead cargo, this was a poltergeist ready to kill.  This was so much fun, I could picture it as a scary tv show.

I really think that I am going to check out the rest of this series! While some parts did seem to be a little slow, I think it’s a pretty solid ghost fighter book. It wasn’t too over the top, but was satisfying.